The 300mW Green Laser Pointer is a serious high powered laser. A very powerful laser that has a little larger dot than normal. The laser also comes with a carrying box, charger, and a rechargeable battery. The beam and dot is so bright it would be great for stargazing and even useful against predatory critters.

There is a multitude of different green laser pointer varieties available to buy online today, but not all of them are capable of lighting matches, popping balloons, or cutting electrical tape. Until now, such high powered lasers were reserved for research or the military, and were large in design and required large amounts of energy to engage. If you’re looking to buy a green laser there are a few things you should keep in mind.

1. How much output power for my green laser to burn?

You’ll need at least 100mW+ and the higher the power the better in order to generate enough heat. Lasers are measured in miliwatts (mW), depending on the power of the laser, and are available in hand held from from 5mW to 1000mW.

2. What is the visible distance of my green laser pointer?

Again, this will depend completely on how much output power the laser in question is. 100mW is potentially visible at more than 10 miles when in the 532nm green beam frequency. The true distance will also depend on a number of factors including weather, altitude, and direction.

High power lasers and laser pointers have undergone a wide range of changes and updates over the past few decades. Where burning lasers used to be reserved for military and research applications, we now have the option to find comparable laser pointers for sale to anyone with the desire to own one. But what laser color and output power is best for burning?

If you're looking for a high power laser pointer with the ability to burn, then you'll need to go with a model that is no less than 100mW.and of course, the higher in power the better as far as burning lasers are concerned.  Laser beams produce a fair amount of heat when the power is increased and can be used for lighting matches, popping balloons, and more.

Color has little to do with burning ability

Green 532nm, being the brightest color of light to the human eye, is commonly mistaken fo also being the best at burning. That is not actually the case, as colo does little to determine the burning ability, it is the power itself that does. For example, 100mW of green will burn just as well as 100mW of any other beam color, and vice versa. 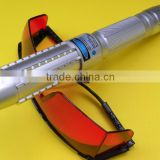