Turn off the computer, check the memory carefully to see if any defect on surface like golden finger, chips and boards, If no damage found. then should be install issue. So take out the momory. wipe the golden finger with eraser or alcohol carefully. after the alcohol evaporate, put the memory into the slot correctly. Also the defected memory slot will aslo lead to boot up failure.

Mainly because the motherboards and memory are not compatible, high frequency of the memory does not support on the motherboards, should try to slow down the written speed in the CMOS. if still does not work. then plese replace the memory.

Mainly as a result of the adoption of different chips of memory, the speed of memory differences a time lead to the crash, this can be solved in the CMOS setup by reducing the memory speed, otherwise, can only use the same memory. Another possibility is memory do not compatible with the mainboard,this rarely happens. poor contact also might lead to random crash.

5. High temperature on the memory

Under this condition. you can add a fan in it to improve the air flowing. Or you can add aluminium or cooper heatsink on the memory for better heat dissipation.

JOINWIN Industrial Development Limited, founded in 2004 in Hong Kong. We began by supplying memory for PC and laptop. Later in 2010 we built subsidiary Shenzhen JOINWIN Technology Ltd in Shenzhen, which integrates R&D, production and selling. As a leading global manufactuer of memory and Solid-State-Drive (SSD). 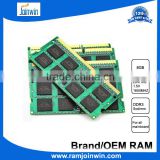