“Vi Huong To” monosodium glutamate (MSG) and “Vi Huong” Noodles, famous products of Thien Huong Co. appearing since the 1960s of the 20th century, were one of the features of catering culture in South Vietnam and South-East Asia at the time. Up to now, “VI HUONG” Instant noodles has been considered as one of the well-known products for a long time, accompanying the consumers during many past decades.

After the complete liberation of the South, and national unification, for the first time Northern people were surprised when enjoying “Vi Huong” noodles, the delicious and convenient instant noodles.

On November 10, 1977, Ministry of Food decided to convert the Company into a State-owned enterprise, and it was renamed Thien Huong MSG Factory from the old name of Thien Huong Co.

Among the above, Thien Huong MSG Factory was the largest member, playing the key role, fulfilling the UE major tasks assigned by Ministry of Food and at the same time supporting all the member factories of MSG & Instant Noodles United Enterprise (UE).

In 1992, MSG & Instant Noodles United Enterprise (UE) was dissolves, and its member factories were managed by Ministry of Light Industries.

Period 1965-1971 was that of starting business and product shaping, Thien Huong Co. S.A.R.L mainly produced MSG under “Vi Huong To” brand and supplied the same to entire South Vietnam and South-East Asian Countries.

In 1972, the Company invested in 2  Instant Noodles production lines (It was then one of the first companies in Vietnam operating as Instant noodles producers), under “Vi Huong” brand. Ever since, “Vi Huong” noodles brand has been always warmly welcomed by the consumers.

During 1979-1980, the Company invested in further production of 2 new products, ie soya sauce and soup powder of “Thien Huong” brand.

In addition to the import of Japanese production line and technology to produce snacks of NEKO brand in 2002, TFC continued to invest in a production line for Jelly Fruits under the same “Neko” brand, at its Head office of Ho Chi Minh City, in 2007.

With products of high quality, safe, in abundant forms and diversity, and using advanced technology in production, TFC has asserted the grade of its products and share in the domestic market, proud to be one of the first and largest fast food producers and suppliers in Vietnam. For over 10 consecutive years, TFC products have been always selected by the consumers as “Vietnamese High-quality Goods”.

Having gained firm confidence from the consumers in Vietnam, TFC proceeds to conquer the foreign consumers. TFC products have strongly penetrated into the markets of Poland, Russia, Czech Republic, Hungaria, Germany, Netherlands, USA Malaysia, and Taiwan. 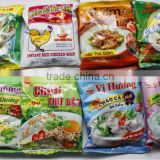