The Canon XL2 allows you to capture images closer to the finished product than ever before. Work that previously was limited to post-production can be simply and effectively accomplished in the field, in the camcorder.
An Open Architecture philosophy, performance found only in much more expensive video cameras, Total Image Control and the solid foundation of Genuine Canon Optics, interchangeable lens capability and superb Canon image processing quality are united in the XL2.
The XL2 brings a host of performance and convenience features to this class of video camcorder- benefits that can't be found in this combination on other high-end video cameras. They include: Canon Super Range Optical Image Stabilization in the standard lens; dual aspect ratios; various frame rate capabilities; image gamma and detail controls; skin detail control and convertible LCD display and among others.
Unprecedented image control coordination between two XL2 cameras, remote computer camera control and direct video recording to computer are just a part of the capabilities of the XL2. Never before has so much creative power been put in the hands of the film maker, video artist, and corporate and event videographer 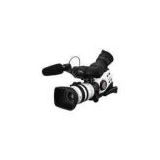