1.Introduction of the rice puffing machine:

The air puffing machine is a kind of grain expanding equipment, which is composed of a puffing tank body, a heating device, a rotating device, a safety protection device, a vibration damping device, a frame, a base and the like. It is based on the traditional fire-expanded cans and is technically transformed. Compared with the traditional small airflow puffing tank, the air purifier has a 4-6 times increase in output, and the safety factor is greatly improved, and the labor intensity of the operator is reduced, and the energy consumption is reduced. The air puffing machine can be expanded as long as the starch-containing material is used.For example :rice, millet, wheat, barley, bitter buckwheat, corn, sorghum, coix seed, buckwheat, beans, etc.In addition, you can also puff pistachio and so on.

2.Features of the puffing machine:

3.Labor saving: A skilled worker can operate 3 sets, which is 20-30% more energy efficient than other machines.

6.It is more convenient to collect materials, and the material is sprayed to the collection position by tilting 35 degrees.

3.Parameter of the rice puffing machine:

4.Pictures of the puffing machine:

Put a certain material into the sealed cast steel tank with lid, use liquefied gas, gas or coal to heat, and continuously rotate the tank at a certain speed to make the material evenly heated. With the continuous heating, the temperature inside the tank is gradually increased. When it reaches 100 °C or above, the water in the body surface will escape and vaporize, forming a certain pressure in the tank. When the moisture content of the material is controlled to be about 5% to 8%, the pressure inside the tank will reach 0.8-1.25Mpa (different material pressures). At this time, the material has been basically matured in the tank. If the lid of the tank is suddenly opened, it is suddenly released from the high temperature and high pressure state to the normal temperature and normal pressure, and the material will become larger at the position of water loss by the filling of the air, and its structure changes. Raw starch (β-starch) becomes mature starch (α-starch), and its volume is expanded several times to ten times. At the moment of release, the airflow and material from the puffing machine instantaneously swelled and simultaneously torn the air sharply, causing a loud noise, and the sound reached about 100 decibels.

Yes, we are. Welcome to visit our factory.
2. Can you change the machine voltage as our request?
Yes, we can.
3.  How about your after-sales service?
Our engineer can go outside to install and train your workers to operate the full machine line.
4.  Warranty time of your machine?
1 year except for consumable spare parts.
5.  How about delivery time of your machine?
Generally it needs 5-7 days for big machines or producing line,and it will be much longer but within our negotiated delivery time. 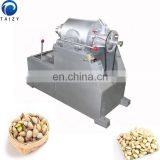