Requires Heavy-Duty Switch or Power Contactor: This controller does not have a built in power relay to turn it on and off. A heavy-duty power disconnect switch such as item # SWT-700 or SWT-705 or power contactor such asitem # RLY-24150 is needed to turn this controller on and off. to the battery pack or motor.

Motor Cut-Off During Braking: When the brakes are engaged the brake switch signals the controller to turn off the motor. The motor turns on again after the brakes are released. 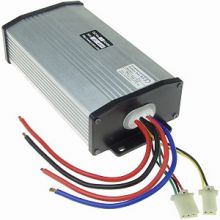