Sodium carbonate is also known as soda ash with the chemical formula Na2CO3. It is a white powder or granules which is odorless. You should keep it in a tightly closed container, stored in a cool, dry, ventilated area. In addition, you must protect it against physical damage and isolate from incompatible substances. The substance is stable under ordinary conditions of use and storage. Meanwhile, with the CAS register number 497-19-8, it has the EINECS registry number 207-838-8.

Meanwhile, Sodium carbonate can also be prepared by ammonia, carbon dioxide and saturation salt, called as union system alkaline which is improved from Solve process by Hou Debang. This reaction has three steps as the following:

When using Sodium carbonate, you must be cautious about it. The substance is irritant to eyes, respiratory system and skin and toxic to aquatic organisms which may cause long-term adverse effects in the aquatic environment. Whenever you will contact or use it, you must wear suitable protective clothing, gloves and eye/face protection. 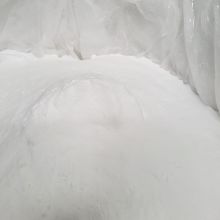