1.  Mid-late maturity, 85-90 days from transplantation to harvest.
2.  Head weight 700 g with light green, peaked curd.
Different Colours of Cauliflower :
White
White cauliflower is the most common color of cauliflower.
Orange
Orange cauliflower contains 25% more vitamin A than white varieties.
Green
Green cauliflower, of the B. oleracea botrytis group, is sometimes called broccoflower. It is available both with the normal curd shape and a variant spiky curd called Romanesco broccoli. Both types have been commercially available in the U.S. and Europe since the early 1990s.
Purple
The purple color in this cauliflower is caused by the presence of the antioxidant group anthocyanins, which can also be found in red cabbage. 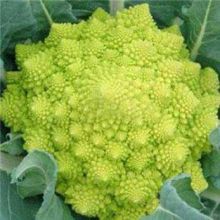