After comparing 6 hydraulic valve factories in China, James found that AAK has a cleanliness obsession with quality

I took James to visit the whole production line of AAK hydraulic valve, from the first raw material inspection to the processing of hydraulic threaded cartridge valves, including heat treatment of semi-finished products, rough machining, finishing, cleaning, inspection of parts, assembly, inspection, packaging, warehousing and other processes. We also introduced the equipment and processing advantages and characteristics of AAK hydraulic valves. He looked the fixtures modified by ourselves for a long time. Two hours later, James said he would go to other China hydraulic valve factories and left AAK.

James replied that AAK is the most distinctive China hydraulic valve factory in China he has seen, mainly including the following details:

2、AAK has 6 senior engineers in the industry, especially the hydraulic valves in the high-pressure category, with the concept of German HAWE, which makes him feel at ease about quality. AAK inspectors used a strong spotlight to check the valve hole, which made him refreshing. In particular, a few of those whose finish does not meet the requirements are picked out, which shows that AAK is harsh on quality. He has never seen such detailed inspection in other China hydraulic valve factories he visited.

3、Although the hydraulic threaded cartridge valve of AAK is about 10 ~ 20% more expensive than the other 5 China hydraulic valve factories, he believes that the service life of AAK hydraulic valves is 1 ~ 2 times longer than that of them.

China hydraulic valve factory, AAK has a cleanliness obsession in quality, which is even more QC than QC. You can also have a small try! 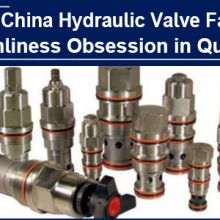