AAK hydraulic check valve has a pressure resistance of more than 450 bar and a service life of more than 2 million times, because:

1.     AAK has engineer who have worked in the Shanghai factory of German HAWE for 11 years and has experience in high pressure resistance.

2.     We have tested more than 20 kinds of steel and selected the most suitable 35CrMo steel to produce the valve spool of this hydraulic check valve.

AAK hydraulic check valve, can resist pressure of more than 450bar, you can also have a small try! 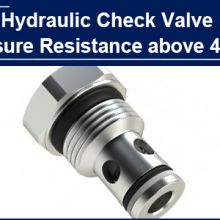