Carton packing or according to your needs

Our Hydrogen Gas Inhalers are the world’s smallest, most portable, as well as have good quality and competitive prices, which you can’t find in any other places around the world.

In fact, the above equipment is the same paragraph, this is our 3-in-1 hot-selling style generator,

1. What are the advantages of your Hydrogen Gas Inhalers over those of other companies?

From 2007 to 2021, nearly 2,000 papers on the medical effects of hydrogen were published, of which Chinese scientists accounting for nearly 60% and Japanese scientists for about 30%. China is a world leader in medical research and equipment manufacturing for hydrogen at present. The smallest and most portable Hydrogen Gas Inhalers of world are from our company. Good quality, very stable. Good Price, our price is even more competitive than many clunky and outdated products, because our mission is to make hydrogen available to more people.

2. How long does it take to inhale hydrogen one day?

For health care, hydrogen inhalation could be 1-2 hours a day.

For patients, 2 hours or more per day is recommended, depending on the condition of patients.

3. Is necessary to inhale the hydrogen for healthy people who are disease free?

There are no 100% healthy people in the world.

One of the important functions of hydrogen is its antioxidant. As long as people are breathing, there is no way to prevent the body from oxidizing. Many scientists suggest that everyone should increase their intake of hydrogen every day.

Hydrogen inhalation should be consumed as a healthy lifestyle, like adequate exercise and a good diet.

The best time to ingest hydrogen is before the hospital detects a disease.

Prevention should be the focus of medicine in the future, rather than waiting until you are sick as before.

4. Is hydrogen toxic to humans? Are hydrogen products safe for long-term use?

In the last 200 years, there has never been a case of hydrogen being unsafe for humans.

Hydrogen is permitted as a food additive in many countries, there is not even a dose limit.

5. Hydrogen works wonders in humans and has no side effects. Could it be a substitute for other drugs and supplements?

We accept the miraculous function of hydrogen, but we don’t think that hydrogen can replace other things that are good for the human body.

Hydrogen just gives us a new idea and a plan that worth trying.

The intake of hydrogen does not affect the effectiveness of other things on the human body, and it can even improve their effectiveness, because hydrogen can enhance the body’s immunity.

Hydrogen has been known for more than 200 years, but its medical significance has only been appreciated by scientists in recent decades. The products used in hospitals need a lot of money from the manufacturers, a lot of researches, and a long process of getting government approval to enter the hospital, which takes a long time.

We believe it is only a matter of time before Hydrogen Gas Inhalers are deployed in hospitals around the world. China and Japan are the world leaders in hydrogen research, and now Hydrogen Gas Inhalers are being used in hospitals in China, Japan and other countries. In 2020, the Chinese government approved the use of hydrogen inhalation as a treatment for COVID-19 with surprising results.

7. Whether the Hydrogen cure all ills or not?

The hydrogen has the extremely high security to the human body, moreover the effect is very widespread, the hydrogen can be said that “Hundred diseases may have a try”, but does not mean that any disease can cure.

8. The downside of Hydrogen Therapy?

Hydrogen helps restore health by changing the state of the body’s cells. It takes time for old cells to renew into good cells, so it takes longer for hydrogen to improve the body than drugs do.

9. If Hydrogen products improve health longer than drugs, why do people choose them?

Almost all drugs, including surgery, have side effects on the body, especially some long-term use of drugs are very harmful on the other organs of body. Hydrogen has been used for nearly 200 years,since it was first used for diving. However, there’s no human side effects have been found.

The current situation is that for many diseases and many patients, the drug does not have a satisfactory effect. But in many cases, hydrogen has often had incredible effects on the human body.

Hydrogen improves the body’s immunity, so inhaling it with hydrogen while taking the medicine often works much better than taking it alone.

Note: If you buy our oxygen-hydrogen machine and it does not improve your health after using it according to our instructions for a period of time, we are willing to refund your money.

Unlike other ways that are beneficial to the body, hydrogen products have many unique advantages

At present, most of the means to treat diseases such as drugs, surgery and so on almost have different bad effects on the human body. Many drugs, for example, for high blood pressure, diabetes and so on, are taken for life. The most common side effect of drugs is to treat a disease in one organ and impair the function of another. But hydrogen is very different. It has no adverse effects on humans, and there has never been a case in the last 200 years that hydrogen has had a negative effect on humans.

Because of its high safety, hydrogen can be boldly tried in the treatment of various diseases. After hydrogen enters the body, it is easy to spread to the cells of various parts of the body, so in the process of treating one disease, many other diseases in the body are often cured. Some scientists suggest that hydrogen inhalation can be tried for most diseases or sub-health.

Compared to the cost of many drugs to buy and use, and all the bad things they do to the body, hydrogen inhalation is really cheap.

Easy to Use and Do Not Change The Lifestyle

The most common way to ingest hydrogen is by inhaling it. It can be done while working, watching TV, looking through your phone or even sleeping.

The Beneficial Attempt of Chronic Disease and Difficult Miscellaneous Disease

Many common diseases, such as Alzheimer's disease, Parkinson's disease, tumor, refractory skin diseases, etc. have no good prevention and treatment methods at present, but a large number of facts have proved that hydrogen inhalation has surprising intervention effects on these diseases, and it is worth trying.

There is a Famous Chinese Saying：The best doctor is to prevent diseases before they get sick. Hydrogen has very broad prospects in the field of health care. Hydrogen inhalation should be considered a good lifestyle, along with a healthy diet, moderate exercise, and regular sleep. 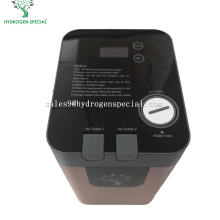